How do you define failure?

Edison failed 10,000 times before perfecting the incandescent electric light bulb. Don’t worry if you fail once. 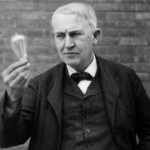 Arguably America’s greatest inventor, Thomas Edison had an extraordinarily positive perception of life that greatly enhanced his ability as an inventor. When others might have been hopelessly discouraged after failing thousands of times in an attempt to develop an electric light, the great Edison simply viewed each unsuccessful experiment as the elimination of a solution that wouldn’t work, thereby moving him that much closer to a successful solution. We could all take a lesson from Edison.

Stories abound about inventors who quit trying and gave up too soon or miners who struck gold just a few feet beyond where someone else quit digging. There are few obstacles in life that will not succumb to consistent, sustained, intelligent, positive action. When you are discouraged after you’ve failed at something, remember Edison’s 10,000 failures before he arrived at the solution that forever changed the world.

We often discover that people we view as “overnight successes” have in fact labored for years in obscurity before they were finally recognized and rewarded for their contributions. Success is a cumulative effort; the journey to the top in any field is usually long and requires careful planning.

If you want to climb the first rung on the ladder of success, you must always take the initiative to get the job done, even when you find it less than challenging or even unpleasant. Eventually, you’ll earn your reward. You will become the boss, the leader, because you have developed the habit of taking the initiative to get the job done. You will get the best jobs because you’ve proven that you are dependable by accepting responsibility for your actions and your future.

The best job goes to the one who can get it done without passing the buck or coming back with alibis.